In response to yesterday’s Ten Questions for Monday, Esteemed Commenter Kate (or E.C., a certified title with the American Honorifics Society) honors us, in turn, with her usual thoughtful considerations. Note that she both prefaces and afterwords her comments with a now customary expression of her otherwise addled state of mind. I’m beginning to take this as akin to the fellow who shows up to watch the locals play at the neighborhood pool hall, and when asked, leading to an invitation, if he’s ever played mutters “a little” and offers that “It’s been a while.” He then slides his case out from under his seat and starts to screw his stick together. His name, he says, is “Fast Eddie Felson.”

Alternatively, Kate is the Columbo of commenters, shuffling verbally away in shows of cognitive dishevelment before turning back with one last, penetrating thought. 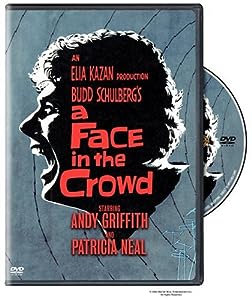 Cover of A Face in the Crowd

Kate begins by finding me, perhaps, not altogether credulous in the matter of Beck rally attendees and their authentic relationship with the legacy of Martin Luther King, Jr. To which I can only respond – skeptical and ironical? Moi?

I have to respond more straightforwardly on two levels. On the level of Beck and many of his fellow rally speakers I can only revile and be revolted. I have hardly been alone, among many others, in long comparing Beck to the Lonesome Rhodes of Elia Kazan’s A Face in the Crowd. These days I begin to believe a different likeness more fitting than the simpler, cynical and fraudulent face of Andy Griffith’s great performance. I now think Beck more fittingly likened to the Elmer Gantry of Sinclair Lewis, a charlatan evangelist, yes, but one who, beyond cynicism, is, during the experience of his charismatic (in both senses) performance imbued with an authentic belief in his own delusional representations. Like the purest method actor, he identifies his own sense and emotional memory with the life of the character he projects. (See how he weeps for America – he loves his country so.) Beyond what clearer, more integrated personalities can even imagine – the sharp distinction between truth and falsity in the simple hypocrite – the charismatic charlatan may recognize his nature only in the moments of instantly turning away from it, in a kind of appalled rationalization and fervent self-justification.

But I engage here merely in an act of imaginative insight. Outside of clinical study, and maybe even within it, for most of us to confront pathology like Beck’s is to face something unalterably alien. 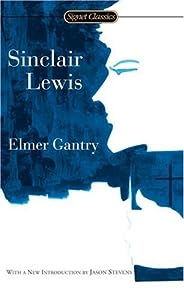 On the level of those who attended the rally, there are potentially, let us say, eighty thousand variants on what they know and think about King. However, we can draw some reasonable conclusions. These are people who are drawn to Beck, drawn to Sarah Palin, and responsive to the idea that the United States requires that its “honor” be restored, and that some sort of return to God, from whom we have strayed, is necessary. It is not much of a reasoned stretch to conclude, generally, that they are mostly politically conservative. What was and has been the relationship of conservative America to Martin Luther King, Jr. during his life and for many years after?

We don’t need to detail the long, ugly history here. As I revile Beck, so King was reviled by conservative America. As he suggested in the speech I quoted, to the Fourth Constitutional Convention of the AFL-CIO, he was called Red and communist. He was considered a dangerous radical, an “outside provocateur,” traveling across the South stirring up local populations. Before the Black Panthers and SNCC came along, he was the Black man conservative Americans most loved to hate, as he challenged the racist America they knew and abided and would not have changed were it not for the likes of him. For decades after his murder, he continued to be disrespected by conservative office holders – in refusing, for instance, to honor him with holidays – so far were they from paying tribute to him.

Now, however, conservatives blindly or disingenuously declare themselves proponents of the simple value and verity of “color blindness.” (So late they are come to the dance, but how they swing their partners. Do they win the prize?) Now, brimming with the resentment of their own sense of racial victimization – color, color, color; that’s all we hear – they can roll “content of their character, not color of their skin” confidently off their tongues as if it were ever so reasonably so and they helped make it reign.

Contemporary conservatives cling to what is no longer rightfully theirs and co-opt what never was in order to pretend their own legacy of significant contribution and relevance. “The party of Lincoln” they love to say – the Lincoln who made war on State’s rights and with the unbounded authority of an emancipating federal pen, lacking even the ink of congressional legislation, overturned the slave-holding rights of the rebellious states. Yes, he’d be a Republican today. And the Trust-busting, conservationist Teddy Roosevelt, who exercised his federal authority over the land to vastly expand the national park system and the network of national monuments, and who, through the Antiquities Act of 1906 bequeathed the authority to his successors to continue the expansion. Yes, he’d be a Republican today. He didn’t even remain one then.

Sometimes, when the opportunistic moment seems right, conservatives will even invoke FDR, and these days JFK, because they sure did love his tax cuts, which is pretty much all they’ve got – a persistent advocacy of defunding the federal government and resisting every social and humanistic enhancement that helped make America the “honorable” nation they claim. They do have Reagan, who looms rather temperately over the current conservative terrain. It is no wonder, more than just esteem, they fetishize the founders: they laid a vast stretch of desert from December 15, 1791 to the present.

Martin Luther King, Jr. is a great peak of his own in the alternative landscape of American social justice, and political parties and movements have lineages, like trail marks of their travel: the people who headlined on the stage this Saturday, and the philosophy they represent, never journeyed through that country. Kate did some fine analysis of the implications to be drawn from the ideas in the excerpt of King I quoted. Like the admirably moderate person she is, though, I don’t think she always, perhaps temperamentally, notes the cynicism eating away at the façade of the reasonable. Said King,

This will be the day when we shall bring into full realization the American dream — a dream yet unfulfilled. A dream of equality of opportunity, of privilege and property widely distributed.

Kate began her analysis by stating,

Worthwhile points to make, and I could offer my own analytical response, but will not, for a reason.

a dream of a nation where all our gifts and resources are held not for ourselves alone but as instruments of service for the rest of humanity.”

Now here, things get interesting. You see, requiring this by legal means is incompatible with all of the preceding points.

She further quotes King on respecting “the dignity and worth of human personality.” Indeed, in his “Letter from Birmingham Jail,” King identifies the nature of justice thus:

Now my point here is not to argue these ideas with Kate, though it would make for an interesting exchange, but to argue that King’s ideas have long been anathema to those who used the “smarmy tactic,” to quote Christopher Hitchens, we saw utilized on Saturday. For see how King referred to law that uplifts human personality. He envisioned the legal system as a tool for the creation of justice – social justice, even economic justice, since economic injustice degrades human personality. King’s rhetoric, befitting the grand human cause he led, can be florid and grandiose: he was a churchman. But I included the last line of the excerpt I used because it is one of King’s most elegantly fresh and profound figures of speech.

The arc of the universe is long, but it bends toward justice.

Only months ago, Beck was urging Americans literally to leave any church in which their pastors speak of “social” or “economic” justice. He would be urging them to leave King’s church today.

What Beck did this weekend was, indeed, the smarmiest, most contemptible ruse to try to steal from a great tradition of human and social enlightenment one of its shining figures. And that it was a figure so emblematic of racial justice, unctuously embraced by people who play on racial resentments and discomfort, is sufficient to make the skin get up and leave the body. It was, quite remarkably, the fear mongerers attempting to do to their domestic enemies precisely what they charge Islamists seek to do with the Ground Zero Islamic center: steal from them the symbolic meaning of their hallowed ground.

What needs to be done in response to the Becks is much more than the bemused superior tolerance being offered up by President Obama, who in only a year and a half seems to have been thoroughly Carterized. Frank Rich the other day invoked FDR’s combative engagement with his reactionary critics. I can only imagine the rare dinner time conversation these days between Bill and Hilary. Many people, seeking amid conflict the insight of wisdom, will quote Lincoln’s second inaugural: “Let us judge not that we be not judged.”

They forget that he offered the sentiment only after he had fought a civil war and won it.